A History of Bridgeport, Michigan

The township of Bridgeport is one of the oldest in Saginaw County, the first settlers having come to that place about the year 1835. Though the exact date is somewhat uncertain Auri Campbell was the first white man to settle at Bridgeport and he built the first house in the township, a log structure somewhere near the present town, though the exact site is not known. Shortly afterward in 1836 a man named Campbell built the second house.

What is now Bridgeport was first called “The Bend of the Cass” or “Cass Bend” owning to the fact that the Cass River makes a sharp bend at the site of the village. On the spot now known as “Cass Bridge” Lilly Cook had started a village which he called “Bridgeport” because of the fact that it was the point where the Flint trail crossed the Cass River. Cook built this village with the intention of making it the chief place in the township and a hotel and post office were established continuing for a number of years.

A man named Bull had however settled at “Cass Bend”, the present site of Bridgeport and had also built a hotel which he called the Bridgeport Center House. His settlement gradually became known as Bridgeport while the other town was called Cass Bridge. Bridgeport was organized as a township in 1848. In 1847 the supervisors ordered the building of a road from the Cass Bridge to the county line and this turnpike connecting with one already extending to Flint, gave Bridgeport its first road which naturally greatly stimulated its growth.

With the building of the electric line between Flint and Saginaw the town for a time took a new lease of life. The railroad came after many bitter fights and a large powerhouse was built in Bridgeport which brought a number of families to the town. With the completion of the Au Sable power project however this plant was dismantled and the men left town.

Typical country village. The village of Bridgeport because of its nearness to Saginaw has for many years been the Mecca of Saginaw people wishing to get away from the city and into the real country. Though so near to Saginaw, being only 6 miles from the city it is as typical a country village as can be found and this fact combined with the ease with which it can be reached has made it an ideal spot for picnics, many Saginaw people taking advantage of its natural beauties every summer.
The cultivation of the land and the general development of the district has somewhat encroached on the former haunts of the picnickers and has in part forced them to seek other places. It is a town of about 300 inhabitants and has the service of two railroads, the Pere Marquette and the Michigan Railway company’s interurban lines.

Bridgeport had many small businesses, mills, brickyards, blacksmith shops and a hotel for many years. It was a very busy town with many important people coming from here over the years. 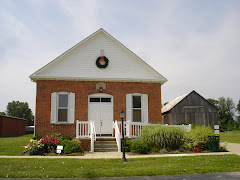 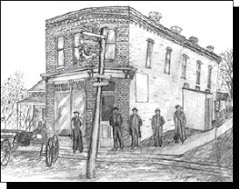 Images and text taken from http://www.bridgeportmi.org/.